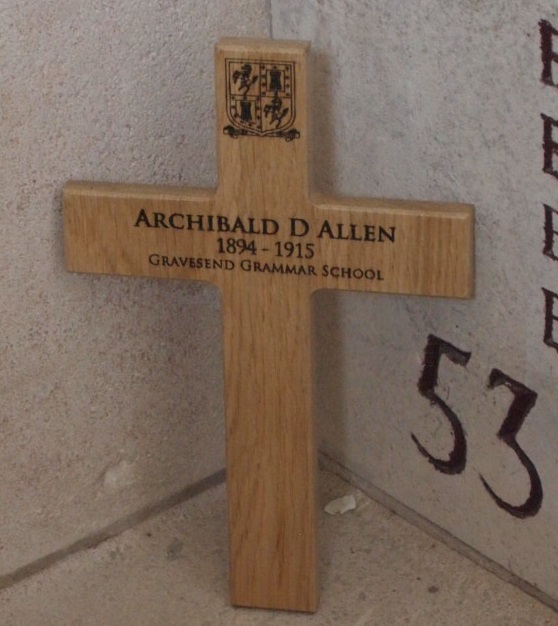 Archibald Douglas Allen was born in Gravesend on 28 November 1894 to Edward Henry Allen (born 1859 in St Pancras) and Janet (née Mills, born 1860 also St Pancras). Early on the family resided in the Peckham area, then moved to Gravesend before Archibald’s birth. In the 1901 Census Archibald is listed as living at 112 Milton Road, Gravesend with his parents and 5 siblings – older brother Edward (born 1885) is listed as deaf from birth, there is another older brother Thomas William (born 1892) and 3 sisters – Janet (born 1883), Minnie (born 1888) and Helen Doris (born 1898). His father worked as a Solicitor’s Clerk.

Continuing his education Archibald attended The Gravesend County Day School (now Gravesend Grammar School) from 1907 to 1909. The County Day School had been originally opened in 1893 as a school of science and art, located in Darnley Street close to Gravesend Railway Station. (With the move of Gravesend Grammar School in 1938 to its present site in Milton Road, the original school building is now the Victoria Centre for Adult Education). By the time that Archibald attended the County School, the 1902 Education Act had been passed and the school had become a recognised Secondary School. Although still a fee-paying school, there were scholarships available, however it is not known whether Archibald was a scholarship pupil. The Headmaster at the time was H F A Wigley, BA, FCS. In the School Admissions Register the family address in 1907 is listed as Jireh Villa, Sun Lane, Gravesend.
By the time of the 1911 Census the Allen family had moved away from Gravesend to 45, The Grove, Brockley – Archibald at 16 was employed as a Shipping Clerk, brother Thomas age 19 an Insurance Clerk and sister Minnie age 22 a Typist.

After the outbreak of World War One, Archibald enlisted in the King’s Royal Rifle Corps, 8th Battalion at St Paul’s Churchyard, Regiment No. A/1195. The 8th Battalion were part of the 41st Brigade (Rifles) under the command of Lieutenant Colonel H C Green. Training took place at Aldershot, Grayshott and Borden arriving at Boulogne in May 1915. On the 21 July the Battalion was located at Poperinghe moving to Ypres, Zouave and Sanctuary Wood the following day. After the explosion of a mine in the German trenches near Hooge, the 41st Brigade took over the front trenches, but were then bombarded night and day by German shells. Early in the morning on the 30th July the Germans upped the offensive with a burning gas attack (flammenwerfer) – the German trenches were only 20 yards away – followed by continuous shelling. Few if any survived this attack on the front trenches and it is highly likely that Archibald Allen was one of the casualties.

Archibald Douglas Allen is remembered at the Menin Gate in Ypres, Panel 51 and 53.

His brother Thomas served as CQS with the 1st County of London Yeomanry (Middlesex) Regiment, No. 250041. He was killed in a plane crash whilst training at Crinkill near Birr, Ireland in 1919. 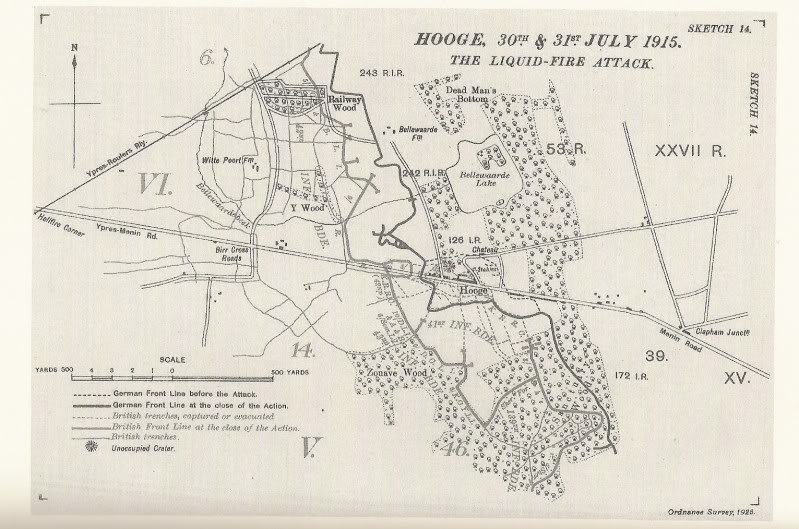