Henry Brynmore Raymond (known to his family and friends as Nibby) was born in Milford Haven, Pembrokeshire in 1886 to George Raymond (born 1837 in Milford Haven) and Esther or Hester (born 1840 also in Milford Haven). In the 1891 Census Henry is listed as living at 3 Dartmouth Street, Milford, Pembrokeshire with his Mother who is listed as a widow (father George died earlier in 1891 before the April Census). There are 3 siblings listed – John (born 1878), Thomas born 1880 and Annie (born 1889). Henry had a further 5 older siblings listed in the 1881 Census – William (born 1865), George (born 1867), Mary (born 1869), James (born 1870 – possibly died in infancy in 1873) and Elizabeth (born 1872). Henry’s father is listed in the 1881 Census as a Railway Packer on GWR. In the 1891 Census mother Hester is a Laundress, she died 2 years later in 1893.
Henry attended The Gravesend Municipal Day School (now Gravesend Grammar School) from 1898. The Municipal Day School had been originally opened in 1893 as a school of science and art, located in Darnley Street close to Gravesend Railway Station. (With the move of Gravesend Grammar School in 1938 to its present site in Milton Road, the original school building is now the Victoria Centre for Adult Education). Although a fee-paying school, there were scholarships available, however it is unknown as to whether Henry was a scholarship pupil. The Headmaster at the time was H F A Wigley, BA, FCS. In 1898 Henry was living with his older brother George at 99 Darnley Road. George had been living in Gravesend for some time prior to this, boarding with the Robinson Family at 8 Parrock Street according to the 1891 Census.
The 1901 Census lists Henry as a student – probably still at the Municipal Day School, and George as a Solicitor’s Clerk, brother Thomas. Age 21, was also living with them, working as a Hairdresser. Their address in 1901 was 18 Parrock Street, Gravesend. After leaving the School he worked as a Clerk in the offices of Hatten, Winnett and Hatten.
By the time of the 1911 Census Henry at 22 was listed as a Solicitor’s Clerk, boarding with the Gooby family at Nethercerne, Acland Road, Winton, Bournemouth, Hampshire. Brother George had married Hetty Leader in 1901 and was living at 108 Windmill Street with their 7 year old daughter Nora.
At the outbreak of World War One, Henry enlisted in Bournemouth in September 1914 as a Sergeant in the Royal Field artillery, 72nd Army Brigade Regiment No. 8997. After training he arrived in France on 9 July 1915, serving both in France and Italy. In January 1917 he was awarded the DCM – the citation reads: ‘For conspicuous devotion to duty. He has rendered very valuable services throughout, and by his devotion to duty has shown a fine example to all ranks.’ Henry came home on leave to brother George in Gravesend in the Autumn of 1918, returning to France on 17 October. Within days of returning he was taken seriously ill and died of influenza on 28 October at Casualty Clearing Station 22.
Henry Brynmore Raymond is buried at Cambrai East Military Cemetery – Burial Plot 1A 25. He is also remembered on the Milford Haven War Memorial.
Brother George by 1918 was Assistant Town Clerk in Gravesend. 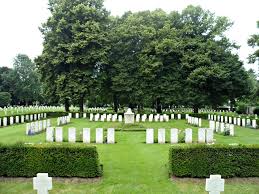