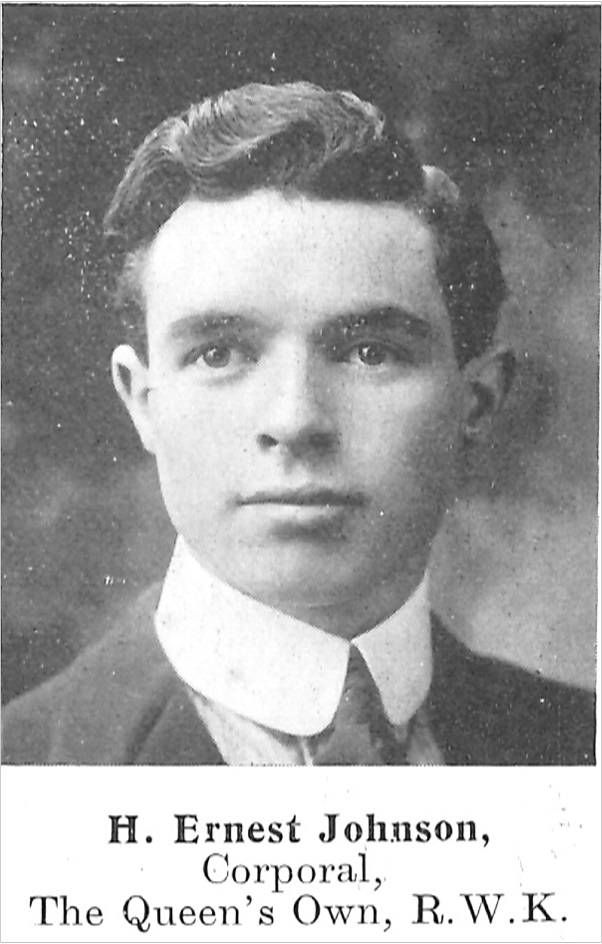 Herbert Ernest Johnson (known as Ernest) was born in Horton Kirby on 5 November 1888 to Frederick Ernest Johnson (born 1860 in London) and Ellen, nee Danes (born 1862 in Farningham). In the 1901 Census Herbert is listed as living at East Hill Terrace, Old Road, Horton Kirby with his parents and 2 older siblings – sister Nellie Louisa (born 1884) and brother Frederick Percival (born 22/01/1887). Father Frederick worked as a Tailor.
The first school that Herbert attended was Horton Kirby. Continuing his education he attended The Gravesend Municipal Day School (now Gravesend Grammar School) from 1901-06. Brother Frederick (Percy) also attended the School from 1899. The Municipal Day School had been originally opened in 1893 as a school of science and art, located in Darnley Street close to Gravesend Railway Station. (With the move of Gravesend Grammar School in 1938 to its present site in Milton Road, the original school building is now the Victoria Centre for Adult Education). Around the time that Herbert attended the School, the 1902 Education Act was passed and the school become a recognised Secondary School. Although still a fee-paying school, there were scholarships available, however it is not known whether either boys were scholarship pupils. The Headmaster at the time was H F A Wigley, BA, FCS.
Herbert left the School (known as the County Day School from 1904) in 1906, transferring to Dartford Grammar School that September. He stayed there until the summer of 1907, serving as a Prefect that year.
By the time of the 1911 Census Herbert at 22 was an Assistant Schoolmaster and was boarding with the Bassett family at Mill Street, East Malling. On the day of the Census, his brother Percy was visiting and his profession is stated as a Law Clerk. Their parents were now living at Warwick House, New Road, South Darenth – father Frederick was still listed as working as a Tailor. Sister Nellie had married John Whitfield Hetherington in 1908. (In the 1901 Census Hetherington was listed as working as a Schoolmaster at the Homes for Homeless Little Boys in Farningham). In 1911 the Hetherington family were living in Liverpool with a 1 month old son Gerard, and John Hetherington was working as an Elementary School Teacher. According to the Census, their older son Frederick Ernest J Hetherington, was staying with Nellie’s parents in Horton Kirby.
At the time of the outbreak of World War One, Herbert was working as an Assistant Schoolmaster at St James School in Gravesend and living at Stanmore, Old Road East, Gravesend. He enlisted as a Private in the Queen’s Own (Royal West Kent Regiment), 5th Battalion, Regiment No. 2161 at Bromley on 5 August 1914. He volunteered for foreign service and in the October was sent with his Battalion’s G Company, to India. He was promoted to Corporal on 10 February 1915. Herbert died of heatstroke, according to the Newspaper report, at Assaye Barracks on 5 May 1915 age 26 (his funeral was detailed in the Kent Messenger 17/07/1915). However, his medical notes from his Regiment state that he was admitted to hospital on 28 April and his cause of death on 5 May 1915 was meningitis.
Herbert Ernest Johnson is remembered at the Jhansi Cantonment Cemetery and the Madras Memorial, Chennai, India – Face 20.
Brother Frederick (Percy) served with the London Regiment, 4th Battalion as a Private and a Lieutenant, then as a 2nd Lieutenant with the King’s Royal Rifle Corps, he fought in France from December 1917. 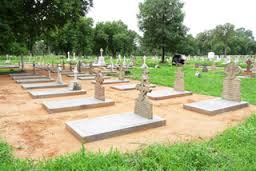