Horace Frederick Robinson was born in Gillingham on 8 September 1895 to John Robinson (born 1858 in Alton, Hampshire) and Mary Elizabeth (née Simpson, born 1858 in Binstead). In the 1901 Census Horace is listed as living at 2 Galley Hill Terrace, Swanscombe with his parents and 9 siblings – 3 brothers, Percy John (born 1883), Henry James (born 1885) and William Francis (born 1888), and 6 sisters, Annie May (born 1884), Ethel Elsie (born 1887), Olive Maude (born 1891), Ida (born 1893), Agnes (born 1897) and Emily E (born 1900). There had also been another sibling who had died in infancy (1911 Census). In the 1891 Census, their father is listed as a Sergeant Major in the Royal Engineers and living in Barracks in Aldershot, by 1901 John Robinson had become a Time Keeper.
The first school that Horace attended was Galley Hill School in Swanscombe. Galley Hill School was built in 1858 and originally held a mechanics’ institute, this establishment being supported by the White’s Cement Factory whose employment was drawing many workers into the Galley Hill area. Bazley White, owner of the cement works, founded the Galley Hill Elementary School in 1858.
He continued his education at The Gravesend County Day School (now Gravesend Grammar School) from 1907-10. The County Day School had been originally opened in 1893 as a school of science and art, located in Darnley Street close to Gravesend Railway Station. (With the move of Gravesend Grammar School in 1938 to its present site in Milton Road, the original school building is now the Victoria Centre for Adult Education). By the time that Horace attended the School, the 1902 Education Act had been passed and the school had become a recognised Secondary School. Although still a fee-paying school, there were scholarships available, however it is unknown as to whether Horace was a scholarship pupil. The Headmaster at the time was H F A Wigley, BA, FCS.
By the time of the 1911 Census Horace at 15 had left school, but did not appear to have a job. Only the 4 younger of his siblings were still living in the family home; Olive, age 20, was a paper sorter as was 18 year old Ida, both Agnes and Emily were at school. Mother Mary Elizabeth died later that year. In 1912 Horace emigrated to Australia, his brother Henry may have already gone out to live there too.
On 20 July 1915 at the age of 20, Horace enlisted in Liverpool, New South Wales in the Australian Infantry, 30th Battalion, C Company, Regiment No. 1312. His address is listed as Roslyn, Cowper Street, Granville, New South Wales and his occupation that of Clerk. His unit embarked from Sydney on HMAT A72 Beltana on 9 November 1916, arriving at Suez on 11 December. After serving in Egypt, his Battalion joined the British Expeditionary Force, leaving Alexandria on 16 June 1916 and arriving in Marseilles on 23 June. Horace and his Battalion took part in the Battle of Fromelles on 19 and 20 July. Over those 2 days 5,533 Australian soldiers were killed, wounded or missing, Horace was listed among the missing. His identification disc was one of the 191 handed over by the German War Office in March 1917; these discs belonged to Australian soldiers known to have been buried by German troops.
Horace Frederick Robinson is remembered at the VC Corner Australian Cemetery and Memorial in Fromelles, near Lille – Panel 2.
Brother Henry Robinson also enlisted with the Australian Infantry, 30th Battalion, C Company, Regiment No. 747. He enlisted a week earlier than his brother, on 13 July 1915 and gave the same address as Horace, living with his wife Catherina Mary. His occupation was listed as Loco Fireman. He was also killed in action on 1 December 1917 and is buried at the Bethlehem Farm West Cemetery, Messines, Belgium – Row F, Grave No, 9. Another brother William Robinson died on 30 September 1918. He was a Lance Corporal in the Duke of Cambridge’s Own (Middlesex) Regiment, 23rd Battalion, Regiment No. G/24471. 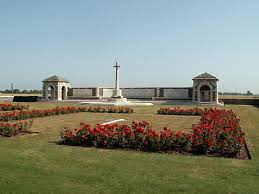