John James Gordon Clarke was born in Grays, Essex on 19 November 1892 to John Clarke (born 1859 in Sydenham) and Elizabeth Sophia (born 1860 in Finsbury). In the 1901 Census John is listed as living at 74 Perry Street, Northfleet with his parents, 3 brothers and 3 sisters – Donald Leslie (born 10/12/1890), Dorothy Gladys (born 1895), Elsie Ida (born 09/03/1896), Arthur Roy (born 04/11/1898), Philip Ebenezer (born 26/09/1899) and Kathleen Victoria (born 1900). John’s father is listed as a Foreman at a Mechanical Engineering Company in Sydenham. By the 1911 Census the family had moved to Lyndhurst, St James’ Road, Gravesend and John Clarke senior was listed as a Foreman engine fitter at a Steamship Company in Sydenham. Brother Donald appears to be working as an apprentice at the same company as his father and John Clarke junior is age 18 and a ship owner’s clerk.
John attended Wrotham Road School before becoming a student at The Gravesend County Day School (now Gravesend Grammar School) from 1905-09. Brother Donald attended the School from 1903 as well as Arthur, 1909, Philip, 1913 and Elsie, 1908. The County Day School had been originally opened in 1893 as a school of science and art, located in Darnley Street close to Gravesend Railway Station. (With the move of Gravesend Grammar School in 1938 to its present site in Milton Road, the original school building is now the Victoria Centre for Adult Education). By the time that John and his siblings attended the School, the 1902 Education Act had been passed and the school had become a recognised Secondary School. Although still a fee-paying school, there were scholarships available, but it is unknown as to whether they were scholarship pupils. The Headmaster at the time was H F A Wigley, BA, FCS.
After the outbreak of World War One John enlisted in the Essex Regiment, 13th Battalion. He married Muriel Simmonds at St James’ Church, Gravesend on 8 July 1916, by which time he was a 2nd Lieutenant. Muriel (born 1891) was the daughter of Sidney Simmonds, a draper from Cobham Street, Gravesend. John and Muriel had one son, John Kenneth Simmonds Clarke. Brother Donald Clarke served as an Engineer Sub-Lieutenant.
John James Gordon Clarke was listed as missing in the 12 May 1917 edition of the Kent Messenger. He was later reported killed in action on 28 April 1917. He is remembered at the Thiepval Memorial, Somme – Pier and Face 10D. 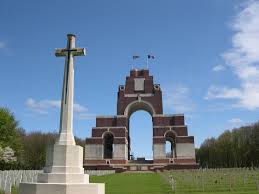